there is a family in our church who has had a very touching experience. their son and daughter-in-law had a baby a few weeks ago with many health issues. they knew he would enter this life with these issues and chose to go full-term and offer him life (however short) rather than abort early on. check out their blog to learn more about their experience and how they relied on God to understand this experience, and the knowledge that the gospel of Jesus Christ brings eternal families.
Posted by david and michal at 10:25 PM 2 comments

i've recently discovered my own, personal incredible super power. even though i was born with this power, i had no idea of its potency, much less its presence in my life, until david pointed it out a few weeks ago. now i see it everywhere i go. it's almost become a curse. here are some photos of me growing up; let's see if you spy my super power: 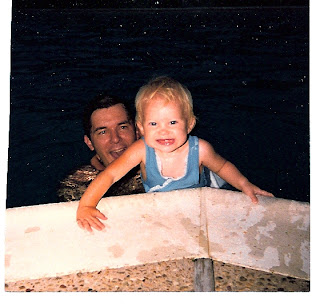 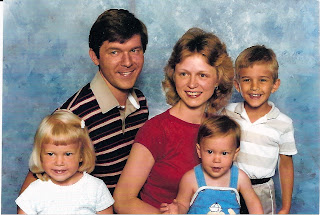 in the top photo i am 13 months old, in the bottom probably 3 or 4. i think my super power is much more visible in the bottom photo, simply because there is an obvious glowing difference between me and the rest of my family. the unbelieving might blame genetics. here are a couple more examples, then you can tell me if you agree with genetics or super power: 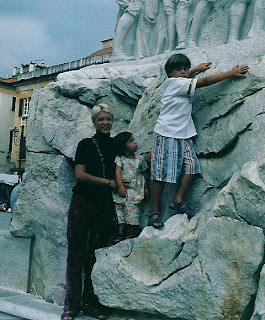 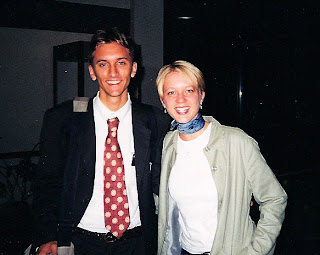 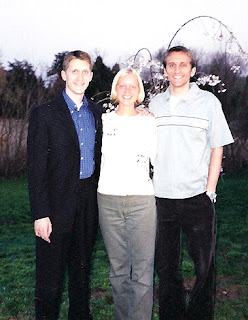 the top photo is from when i was a nanny in italy. i spent every day watching the kids on the beach. the sun definitely adds strength to my super power. as you can see in the middle photo of christian and me, however, the sun doesn't work in the same way, even on blood relations. this photo was taken after christian had gotten back from his lds mission to italy, where he'd spent time walking around in the sun all day every day. i, meanwhile, had been home from italy for about 9months, and was living in central pa at the time. my power was still outshining his. the last photo on the bottom is of my two brothers and me, taken maybe a week after i'd gotten home from my lds mission to brasil. it is so obvious here i think you have guessed it by now: i am blond. super blond. i have never colored, dyed, or even so much as highlighted my hair. the sun does that for me. i guess you could say i am like superman in that respect: i draw my strength from the sun.
i guess i never noticed this power before because it's what i've always had and always lived with. here's when this power was drawn to my attention: a few weeks ago david asked me to bring his work shoes to red wing to get them waterproofed for him. so after class i drove to the store and asked the guy to waterproof the boots. he gave them back to me in a box, all gelled up and ready to go. i thanked him for being so kind and went on with my day. when david got home and saw his boots super-gelled waterproofed, sitting in a box, we had a conversation that went something along these lines:
"he did this because you're blond!" david exclaimed.
i looked at him incredulously, "what? he's a really nice guy, david. i think he was just doing his job. i said thank you."
"he's never given me a box before! and these are like, super-gelled waterproofed! he's never done this nice of a job for me. it's because you're blond. this always happens!" he complained. this isn't the first time david has made this complaint. he often says "it's because you're blond", but i typically brush off the comment because i have no idea why he can't accept people simply being courteous or doing their job.
"what are you talking about?! i think you're acting a little insecure. there are a lot of other blond connotations out there, you know, none of which have to do with getting a good waterproofing job as far as i know. give me some more proof, then maybe i'll believe you."
david then proceeded to list a number of occurrences in which he saw my super power in action:
anyway, as david listed more and more items i realized i have been getting preferential treatment nearly my entire life--and i haven't even noticed it until now! this got me thinking: do i have a 3.9gpa because i'm blond and the majority of my professors have been male? have i always gotten the job on the spot because i'm blond and not because of my resume? i usually befriend guys before girls because they're easier to talk to...do i have friends only because i'm blond? did david marry me because i'm blond? after i posed this concern to him, david assured me that although he may have become my pen pal because i was blond, he married me because he'd fallen in love with me. phew.
so david thinks i have a super power that gives us more opportunities than if i were brunette or redhead. but even after all the examples he listed, i still have to put my two cents in. i mean, if you're blond, you also have the blond curse. all you natural blonds out there know what i'm talking about. when we wear make-up, we look natural. without make-up, we look dead. then there's the "blonds have more fun" stigma, and the "dumb blond" stigma. do people always envision greek goddesses as blond? i've always pictured athena as brunette, and aphrodite with flowing red tresses. i bet all the brunettes and redheads out there picture blond princesses in fairy tales.
if i've ever made anyone do something due to my power, i sincerely apologize. it was completely unwittingly. now that i am aware of this super power, i will definitely try to keep its effects to a minimum. i mean, i certainly don't want to go through life thinking it's just my hair and not me that's making a difference!
P.S. david has a super power, too (he was jealous i didn't include this earlier). legend has it he was getting his physical to begin working as a driver for ups. part of the exam included an eye test. the proctor asked him to stand behind a predetermined line and read the smallest line of letters possible. david cheerily responded, "ok, i'll read line 8." (who knows if it really was line 8, he can't remember, we just put that number in there to further the plot) the proctor disbelievingly replied, "what line?" you see, even though she was standing right next to it, she couldn't even see a line 8 with her simple 20/20 vision. david then proceeded to read without hesitation, backwards and forwards, every letter of the line perfectly. you see, folks, he has been gifted with 20/13 vision. genetics or super power? you decide.
Posted by david and michal at 6:15 PM 4 comments 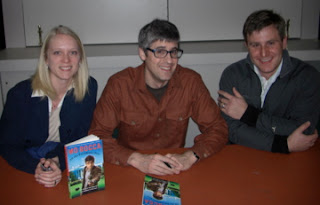 we were first introduced to mo rocca while doing saturday morning errands and listening to npr's "wait wait...don't tell me!" radio gameshow program where you can win carl kassel's voice on your answering machine (!). mo was one of the commentators and we laughed every time. he has a dry, matter-of-fact way of stating the comically obvious.

we next saw him on food network's iron chef as a judge. as always, the amusingly dry comments, which seemed even funnier in this arena because he isn't a "foodie" like the rest of the judges are. he definitely made the show a little quirkier, which is an improvement.

we then met mo in person at uvsc last wednesday!! he came to little old uvsc (most likely on a connecting flight from somewhere to somewhere), and made us all laugh with how to be an expert in any field you so choose. a little political discussion on the presidential candidates was thrown in for good measure. david and i stood in line for a book signing after the program, and we were both very impressed by how approachable he is. neither of us have ever met a celebrity before, so we don't know how they really act, but mo seemed genuinely interested in talking with the people who were getting their books signed. he didn't seem like he was in a hurry, or thought it was annoying or boring. he gladly had girls kiss him on the cheek while taking pictures, shook hands, and personalized each book. way to go mo!
Posted by david and michal at 12:06 PM 3 comments 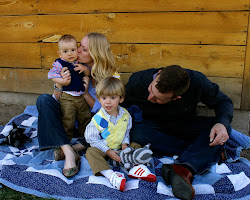 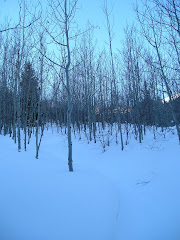 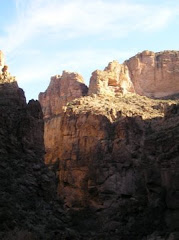 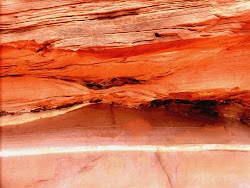